Examples of Propaganda from WWII

This is the first bout of research I have done into propaganda posters. I chose to start with WWII as in my eyes it is the most famous and a few specific designs have become synonymous with the word propaganda for me. I will later have a look at other examples from other pivotal era's within the time span. I specifically want to focus on British WWII propaganda to begin with however, because I think it has a very unique and (for me) inspirational style. It differs greatly even from American WWII propaganda which I may visit at a later date.

I shall list here a few posters that really caught my eye. I will try to source the artist to discuss their life and other works. I will give an overview of the design choices, meanings and target audience for the posters and I will comment on how they will effect my design ideas and idea creation going forward.


"Together We Shall Strangle Hitlerism" 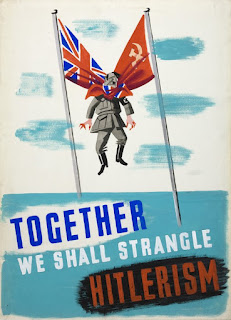 This poster is a piece of English propaganda from the second World War. The artist is listed as unknown on all of the sources I have managed to find however, the artwork has thought to have been created in the period of 1940-1946.

I really like the idea behind this poster. It's art style also compliments it perfectly. The idea of two things so symbolic yet lifeless carrying out such a pivotal, human action I find really effective. The obvious brush strokes and simple colour scheme really help to just state the purpose of the poster and reflect how serious and professional the aim is. There is no finessing and over complication in the art style and execution of the poster. It is just simple and brash as the government wished that the act of strangling "Hitlerism" would be. The government wouldn't want to panic anyone who saw this poster and so i think that the art style reflects how simple and effortless banding together to face Hitler would be.


The target audience for this poster I think is... everyone (In the UK and Russia). It doesn't really seem to focus on any one group of people. It is more I think a moral boosting piece designed to inspire confidence in civilians that their country will stand firm and win the war if everyone works together through this.


This kind of almost childlike art style with a very serious message I find very intriguing and appealing and will be something I shall experiment with in the early stages of design for my propaganda poster. one of the main design elements I am particularly fond of is the way that the page is separated in two by the two blocks of colour. it works really well to combine a hard hitting image with a few words that effectively convey a point.


Unfortunately, on the sources I have seen so far I cannot seem to find the artist who created this poster however, I shall keep searching and review more of their work should I find it.

This poster is another piece of English propaganda created in World War 2. This piece was created by Reginald Mount. He was a British designer born on the 14th of July 1906. He joined the Ministry of Information in the 1930's around the outbreak of the second World War. He then around 1939 joined with Eileen Evans and began designing and producing a large amount of propaganda for a myriad of different uses. Some of his work is quite famous and he even designed the poster campaign for the 1955 film "The Ladykillers".

This poster is a very powerful and influential piece of art. There are no words at all (other than the logo in the bottom right). This really helps to hammer home the image. It smacks you in the face and really grabs your eye. There are really simple and few amounts of colours, limited (yet still accurate) amounts of detail and and a very poignant and brash image. It conveys a very positive theme and a very inspirational vibe. The image reflects that the work of the average Joe in Britain that may seem mundane, tedious and inconsequential however, this poster reminds them that the work they do lifts the planes into the sky and allows the guns to fire. They are saving lives and winning the war just as much as the soldiers on the front lines and the captains of great battle ships.

The target audience are the workers in the factories who are creating all the vital parts and components that go into all of the vehicles, weapons and supplies that go into the British and Russian war effort. The reason that I mention the Russian war effort is because of the Russian text that is in the bottom right hand corner. This signifies that the poster may have been intended for use overseas in Russia as England did supply Russia with crucial components and supplies and so this poster would have probably been used over there to inspire and reassure their troops and factory workers.

I personally love this poster it's style and message are so simple yet so powerful. The idea that a single hand lifting a plane over the sea can have such a powerful meaning to so many people even over multiple countries I find inspiring. The simplicity of the design and execution also works really well and is again definitely something I will experiment with when refining my designs. 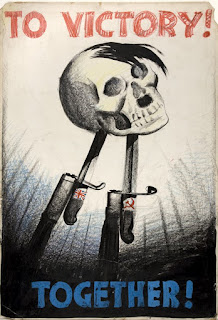 This poster is yet again another piece of British propaganda from the second World War. Similarly to the first poster I researched I cannot find the name of the artist however, it is dated to between 1939 and 1946.

This is one of my favourite posters that I have found thus far. It is just so unmistakeable. The second poster was powerful however, the overall meaning was a little convoluted and unclear. With a little thought and research I was able to find that it was targeting factory workers and men and women overseas however, this poster is completely clear and focussed. There is no doubt in your mind what the meaning of this poster is and it is very successful at conveying that message. It is clearly Hitler's skull speared on the bayonet of both a British and a Russian soldiers weapon.

The target audience is again everyone in the UK and Russia. It is merely a truly inspirational and moral boosting poster. It just works and gives you a huge amount of hope that you can pull through. It again however, makes a point of saying "Together". This is mentioned in the first poster I reviewed as well. It is inspirational but reminds the viewer that they have a pivotal role in the success of the war effort and to keep on going strong.

This poster instantaneously gave me many ideas for posters I can create and it's simplistic art style has also given me inspiration as to other designs I could do that have a similar, hand drawn art style to them.

In general WWII era British propaganda posters are very simplistic. They have very limited words on the page however, the words that are present always have a deep meaning that ties in with the images and themes also being conveyed. Specifically in the posters I reviewed the word "Together" popped up quite a bit. It's little things like that they may seem insignificant at first glance however, they really do help drill home key points and messages.

Another thing i found to be really interesting and inspirational was the art style. There is a distinct limitation on colour, detail and complexity to all the images. They are all very blocky, simple representations of things that tie into the message of the poster. This works really, really well and there are a few reasons why. First and foremost it looks aesthetically appealing, the lack of detail allows your mind to fill in the details or to simply appreciate the representation of the object that the artist has drawn.  It also works on the subconscious level to reinforce subtle messages of simplicity in the plans they are putting forward. They would like the public to believe that it is not a difficult task to carry out and that should help to relax their mind and help them to do their part in the war effort. I think this aspect works very well.

The lack of colour however, I find very appealing. This is most definitely an idea i shall carry forwards into the design process. I know off hand that the other styles of propaganda from different countries and eras have a vast amount more colour and complexity to their images. Mostly representing the colour of the flag or a colour that ties in with the country but I think that the sheer lack of colour in these posters is effective to no end. It looks really simple and hopeful. There is not too much to look at and so you are really drawn to the image and the message conveyed and really allow it to sink in and make an impact.

All in all this is a very interesting and influential period in propaganda production and their are a lot of design elements I am going to experiment with in the near future. I am yet to explore other countries propaganda but I think that British WWII propaganda will certainly influence my designs and ideas heavily as I have found the examples I posted here to be really impacting and aesthetically influential.
Posted by Unknown 1 comment:

This is my first project in the first year of the FDA in Digital Media Design and so I thought that in my first blog entry I would summarise the brief in my own words. It may bring to light certain aspects and actually help to understand the overall project a little bit better.

I have been asked to promote an aspect of Social Media in the modern era of Web 2.0 through the creation of a propaganda poster based of that of the style produced between 1900 and 1950. I have the choice of websites including FaceBook, YouTube and Twitter.

There are many different countries which have produced many different styles of propaganda in different time periods including Russia, China, Britain, America and even French and Spanish. I am going to look into all of these styles in search of inspiration and strong sense of themes and art styles. I will then base my poser of these styles and themes as closely as I can.
Posted by Unknown No comments:
Newer Posts Home
Subscribe to: Posts (Atom)